“If ignorance reigns in America, I do not know what name you could apply to it here on moral subjects in Australia and New Zealand. It appears in very many places like heathenism.”

As people put their hand up and say yes, lets get rid of religion in this country, so family values, education and morals, crime are dramatically increasing also. Here as the Sydney Morning Herald said we shall experience our own form of Jesuitism which will impact civil liberties as the baby is rocked to sleep and brain washed by young media or muzzled media reporters. Too often a PHD sets in concrete the mind set of the teacher, that toes the line on world government implementation trends.

It is in the interest of the Jesuits to muzzle free speech except as it might interest its own cause. Not only in Australia but worldwide “It is an unprecedented overreach of government power which poses a real threat to the freedom of the press,”

One of the amendments government made to 35P was that the Director of Public Prosecution must take into account the public interest, including the public interest in publication, before initiating a prosecution of a whistleblower or journalist for the disclosure of an SIO.

But Greg Barns of the Australian Lawyers Association said this clause was “bullshit”.

“The Director of Public Prosecution in every case it prosecutes uses a public interest test,” he said.

Mr Barns added that the DPP would be under “considerable pressure” by government to prosecute anyone who disclosed information.

He said the laws would have “not just a chilling effect but a freezing effect” on national security reporting.

The smothering of truth worldwide which the west has once had some advantage by its access to, will bring us shortly to the image of the beast in which civil law is controlled from the Jesuit ideology and persecution of judaising Christians shall be placed in a modern technological setting.     Hosea 4:9      And there shall be, like people, like priest: and I will punish them for their ways, and reward them their doings. 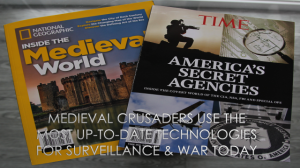