Skip to content
‘Vatican II prepared us for a world that is evangelical territory.’ Proselytism in its present meaning includes inducing people by offering them any kind of assistance, such as food, education, shelter or clothing. In each of these cases, proselytism is wrong because it does not respect the freedom of the other. However, while these methods of making converts is sinful, inviting others to the fullness of truth is not only not wrong but is truly an act of love.’ 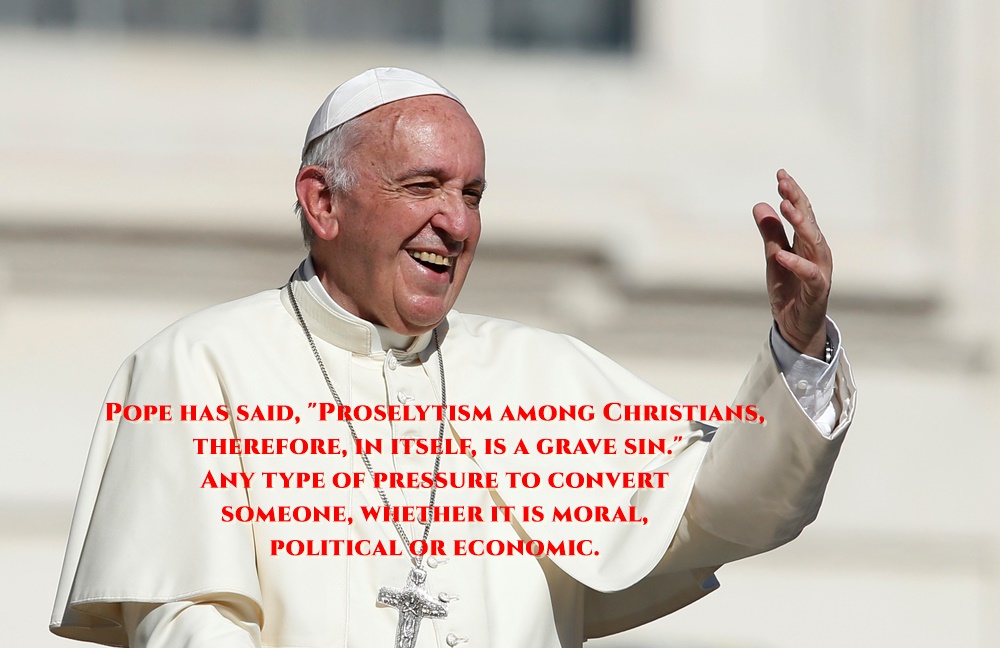 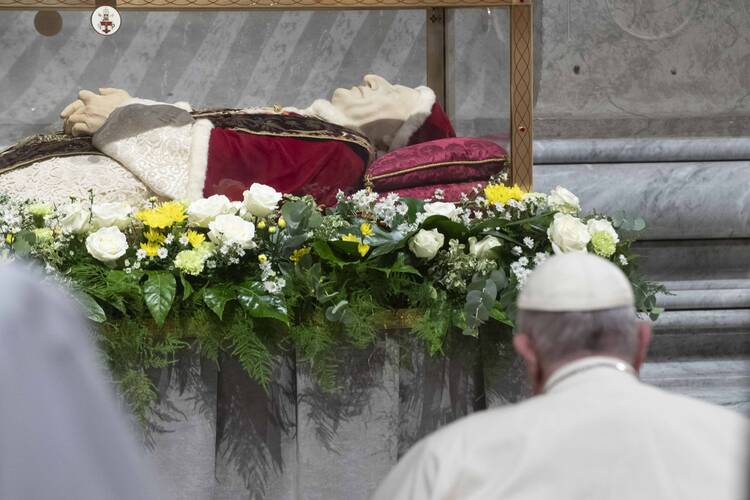 Pope Francis prays before the remains of St. John XXIII after celebrating Mass in St. Peter’s Basilica Oct. 11, 2022, to mark the 60th anniversary of the opening of the Second Vatican Council. (CNS)

I sometimes wish that I could travel back to see my parish in the 1950s in West Philadelphia. The great domed church, St. Francis de Sales, towering over Victorian houses and Edwardian apartment buildings, can seat 800, but back then it needed simultaneous Masses in the lower church and the parish hall to fit all the attendees. I wish I could still watch that many people streaming toward the church each Sunday. We are not now that strength which we once were. The loss of that strength is hard, but it can end up being the source of renewal.

Recent days have seen a flurry of articles and tweets about the 60th anniversary of the beginning of the Second Vatican Council. Perhaps no article received as much attention as Ross Douthat’s “How Catholics Became Prisoners of Vatican II” in The New York Times. In it, he makes three claims: The council was necessary, the council was a failure, and the council cannot be undone.

We experience now a church where the laity matter—where, for example, a Times columnist without any church title can have a voice.

In a way, one can see why Mr. Douthat makes the claim that Vatican II failed. In the decades since the council, Catholics have abandoned the church in droves. To enter church buildings on both sides of the Atlantic is to encounter emptiness (unless the church has been turned into a brew pub). There is nothing worse than a person leaving the church, and yet so many have. Those who leave are our brothers and sisters. When whole countries, whole generations, turn away from the altars, all our hearts should be torn a little bit.

Mr. Douthat’s claim of failure is not abstract. It is painful, it is real, and it needs to be paid attention to. These are real people who have fallen away from the Body of Christ. Sure, we could easily retort that these precipitous declines have many causes, that they began prior to Vatican II, and that they should be blamed on failures to live out the actual council. And yes, there have been similar, if not worse, declines in other religious groups and in civic groups of any kind. And yes, the church’s growth in Africa and Asia has been meteoric. This is all true. And yet, the council did not stop an exodus of Catholics, and some reforms undertaken “in the spirit of Vatican II” arguably exacerbated that decline.

So are we prisoners of a failed council? No, for several reasons. First, in the Vatican II documents themselves, we received a wonder of theological richness promulgated with the full teaching authority of the church. They provide definitive teachings on the nature of the church, on the nature of the human person and on the vocations of the baptized. With the promulgation of these documents, we have officially refuted an antisemitic past and begun to engage earnestly in interreligious dialogue.

We experience now a church where the laity matter—where, for example, a Times columnist without any church title can have a voice. Many Catholic institutes established since Vatican II (like the Collegium Institute in Philadelphia, where I work) are lay-led, lay-initiated endeavors to present Catholic thought and culture to the most secular of audiences. As participants in these works, we do not follow the world; we are working in it to lead it to Christ.

Watching my wife at Mass last Sunday read the Old Testament while carrying our baby girl in a wrap is a testimony to the fact that the council did not fail. She is not a prisoner of Vatican II. She is a baptized layperson proclaiming that Naaman brought three loads of dirt because he would no longer offer worship “to any other god except the Lord” (2 Kgs 5:17).

What if instead of dissecting the failure of Vatican II, we recognize that the council’s time to succeed is only just arriving? Vatican II gave us the tools and the evangelical vision to live out the Gospel in these Christ-forgetting times. The collapse in religious practice (and community life) that began in the 1960s was too comprehensive in Western society—from Episcopalians to bowling leagues—to have been halted. The church needed to be prepared for a world she no longer controlled. Vatican II was part of that preparation.

Like so much else in the 1960s and 1970s, the teachings of Vatican II were not always accepted by a world that was not ready for them, and too many rejected the council and Catholic tradition in favor of conforming to the world. This is the true meaning of Pope Francis’ hard words recently for progressives that “line up behind the world” and for traditionalists who “long for a bygone world.” Both are attaching their dreams to a world instead of being evangelical. And in a Christ-forgetting time, worldliness is death and evangelization is life. We need to get busy living.

Vatican II prepared us for a world that is evangelical territory. There is no space left where temporal power can be used to batter people into the pews. The council taught us to give up on coercion, to instead live evangelically. As Pope John XXIII put it at the opening of the council, the church’s “present needs are best served by explaining more fully her doctrines” and by using “the balm of mercy” rather than issuing more condemnations enforced by “the arm of severity.” The arm of severity was always the wrong way, but it would now be a ludicrous way. Vatican II freed us from strategies of coercion in favor of evangelization at the moment that the church was losing the final vestiges of its coercive power.

Vatican II was not about stopping secularization. It was about how to live as Christians in a secularized, sometimes hostile and sometimes apathetic world.

Vatican II restored to us what Bartolome de las Casas calls the only way to teach the living faith of Christ, “the way that wins the mind with reasons, that wins the will with gentleness, with invitation.” That is the freedom of the Gospel. Vatican II was not about stopping secularization. It was about how to live as Christians in a secularized, sometimes hostile and sometimes apathetic world. The only way to live as Christians in such a world is evangelically. Vatican II frees us to do this, frees us from political power to be a church that Pope Francis describes as “madly in love with the Lord and with all the people whom he loves.” A church so in love that she does not follow the world but instead goes out to the world to proclaim Christ and him crucified.

Ross Douthat is right that Vatican II was necessary and that it cannot be undone. He is right that Catholicism in the West has failed in the past 60 years. But he is wrong that the council failed. As he writes, “you begin from where you are.” I can’t go back to a packed St. Francis de Sales, but I don’t really want to. St. Paul told us that “it is when I am weak that I am strong” (2 Cor 12:10). We may now be weak, but we are strong in the witness of Christ. That is what really matters. Vatican II is a guide for how to begin again as salt, leaven and light, unafraid to be unabashedly Catholic in a world that is unabashedly secular. The time to make Vatican II a success was not the late 20th century. The time is now.