The terrible scenes in France sees in the New Year possibly projecting what is to come as we race toward a world that’s tired and coming to a tragic end. It seems that what has been stirred up in Islam brought on 9/11 and from that back to ‘desert storm- a war to end all wars’, to the drones and the death that was inflicted but mostly remains hidden, and from there to heightened surveillance and security measures and laws increasingly surround free speech and what information is allowed to go through main stream press in democratic countries.  “What we have achieved tonight is to ensure that those who protect us, particularly in a newly dangerous age, have the strong powers and capabilities they need,”   Unfortunately the free press is so untrue to their call that is may well be said that they have helped to create the situation.

A murderer may well get less time in prison than a person exposing the truth and as we know the exposure of the atrocities in the Vietnam war gave the ability for the people to call for justice against its government,  but this was no longer tolerated  particularly while America and western Europe are taking control.  The porn’s in the game are definitely us and Islamic extremists may well be achieving more for western powers tha

n they ever imagined.

The two swords we might say in a modern day setting is the power of Islam or again the call for retaliation for extremist attacks. We find all this in the history of the church and the conflicts are all in the name of God. So people point to this and say that religion has been the cause of all wars.  Jesus said Matthew 10:34 Think not that I am come to send peace on earth: I came not to send peace, but a sword.  Then we read Ephesians  6:15 And your feet shod with the preparation of the gospel of peace;

Truth is a dividing line on one side procreation and worshiping on the day God set aside and on the other side good and evil and bloodshed. Who is on whose side?  He that spills the blood of another human being is not a creationist or Christian. You may say well Israel of old went to war. Yes that was a theocracy lead directly by God but the USA is not neither is any other world power today.  However the USA come to mind as the most powerful nation on earth wearing the badge of Protestantism and therefore has a weightier obligation for real transparency and justice not a smiling killing machine. Numbers 33:52 Then ye shall drive out all the inhabitants of the land from before you, and destroy all their pictures, and destroy all their molten images, and quite pluck down all their high places: 33:53 And ye shall dispossess [the inhabitants] of the land, and dwell therein: for I have given you the land to possess it.  The nation of cannon had become so filthy and involved in human sacrifice and disease that God directed them to take over the land.

“Unusual in ecclesiastical heraldry, (Pope Paul) Paul was known to display the Sword of State and Sword of Justice in contemporary renditions of his arms to remind Paul’s opposition and detractors of the his supreme power to make law and deal in death.” The sword of the Papacy ecclesiastical and temporal power though church and state- the power of the beast.

The sword of the state was wielded 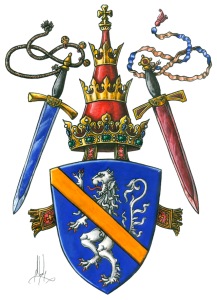 by another sword of Roman Catholic doctrine, church and state were joined and by this the church said it was innocent of the blood of her victims as the state carried out the punishment.

Luke 22:31 And the Lord said, Simon, Simon, behold, Satan hath desired [to have] you, that he may sift [you] as wheat:
22:32 But I have prayed for thee, that thy faith fail not: and when thou art converted, strengthen thy brethren.
22:33 And he said unto him, Lord, I am ready to go with thee, both into prison, and to death.
22:34 And he said, I tell thee, Peter, the cock shall not crow this day, before that thou shalt thrice deny that thou knowest me.

22:36 Then said he unto them, But now, he that hath a purse, let him take [it], and likewise [his] scrip: and he that hath no sword, let him sell his garment, and buy one.

22:37 For I say unto you, that this that is written must yet be accomplished in me, And he was reckoned among the transgressors: for the things concerning me have an end.
22:38 And they said, Lord, behold, here [are] two swords. And he said unto them, It is enough.
22:39 And he came out, and went, as he was wont, to the mount of Olives; and his disciples also followed him.

Now Peter had his sword with him when they came to take Jesus away he is ready to defend Jesus.

22:48 But Jesus said unto him, Judas, betrayest thou the Son of man with a kiss?
22:49 When they which were about him saw what would follow, they said unto him, Lord, shall we smite with the sword?
22:50 And one of them smote the servant of the high priest, and cut off his right ear. 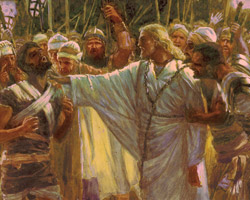 Matthew  26:52 Then said Jesus unto him, Put up again thy sword into his place: for all they that take the sword shall perish with the sword. Or today we would say those that take the gun shall die by the bullet.
26:53 Thinkest thou that I cannot now pray to my Father, and he shall presently give me more than twelve legions of angels?
26:54 But how then shall the scriptures be fulfilled, that thus it must be?
Luke 22:51 And he touched his ear, and healed him.
22:52 Then Jesus said unto the chief priests, and captains of the temple, and the elders, which were come to him, Be ye come out, as against a thief, with swords and staves?

Peter was perplexed and when he had stood up for his Lord with the sword he was rebuked. He showed that he was ready fo the fight.

You can see how Peter was confused yet Jesus had warned him in the upper room and said the devil has desired you but I have prayed the Father for you.   So Peter took up the sword but it ended in disappointment and he was off guard when he denied his Lord. Now what about the civil power that control men? Revelation  13:7 And it was given unto him to make war with the saints, and to overcome them: and power was given him over all kindreds, and tongues, and nations.  13:9 If any man have an ear, let him hear. 13:10 He that leadeth into captivity shall go into captivity: he that killeth with the sword must be killed with the sword. Here it is speaking of the power of the Papacy, the one whose deadly wound was healed. The beast that rises from the populated areas of the earth or the sea Rev 17:11. There from individuals to governments God will punish the inhabitants of the earth for their war like aggression in what ever form, no end justifies the mean but God will put an end to such.

So from individual to nations they make a mistake- injustice a lack of love for one another shall be brought into judgement. these judgments which we might call global warming are direct judgments from God for moral transgression.

Not following natural law which God has ordained which intelligent rational beings are meant to respect. Chemalizing the world and destroying people lives by direct chemical poisoning and by warfare and not following a knowledge that pertains to life will have its consequences.

No kingly power is to rule over an individuals rights to worship in freedom, no church is to dictated the right of an individual in their work before God and no nation has the right dictate in matter of conscience.

That is why a warning is given to the Protestant and Catholic churches and to the nations in Revelation 14. A controlling blinding force of church and state will come but woe to the churches by whom this is done, God call for every yoke on physical and spiritual well being to be let go or see the results. Rev 16:14 For they are the spirits of devils, working miracles, [which] go forth unto the kings of the earth and of the whole world, to gather them to the battle of that great day of God Almighty.

As false teachings from corrupt ministers of the gospel joined  church and state for the purpose of the state to enforce it’s ideology, to justify war against heretics, to enforce Papal laws on its subjects so we are about to reenter a similar period of time as foretold by the Bible prophets. This time false teachings will bind Romanism not only on American citizens but on the world and points to the reestablishment of Israel when Christ said my kingdom is not of this world.  False teachings such as a false Sabbath and false teaching about the state of the dead; these false doctrines allow for the appearance of the Antichrist making the USA his theocracy like Israel of old but it is that in appearance only. Revelation 16:13 And I saw three unclean spirits like frogs [come] out of the mouth of the dragon, and out of the mouth of the beast, and out of the mouth of the false prophet.  A lamb -like beast which appears in the 13th Chapter of Revelation fits perfectly the USA and this has been predicted since the 1800s when America was still a young and innocent country.  No other country fits this description in the Bible- its comes from the land a less populated area of the earth (not as all the other beasts which rise up out of the sea) at the time the beast or papacy received the deadly wound.  It appears like a lamb and people are not afraid of a lamb but its says it speaks like a dragon- there is no other earthly power in the Bible described in such a way. (the lamb of course represents it’s Protestant roots, a professed follower of Christ the lamb.) Rev 13:11 And I beheld another beast coming up out of the earth; and he had two horns like a lamb, and he spake as a dragon. 13:12 And he exerciseth all the power of the first beast before him, and causeth the earth and them which dwell therein to worship the first beast, whose deadly wound was healed. 13:13 And he doeth great wonders, so that he maketh fire come down from heaven on the earth in the sight of men,

The good news is that America’s people have a heritage that I believe will be to their advantage- this is the birth place of a commandment keeping people that spread world wide and most denominations do not fit the rules of Exodus 20 by which all humanity is examined in the judgment.