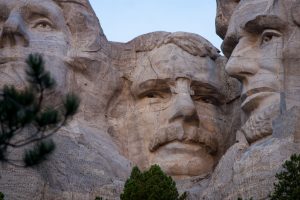 An iconic 1939 bronze statue of Theodore Roosevelt has stood prominently, boldly, in front of the American Museum of Natural History in Manhattan for over 80 years, greeting schoolchildren, families, history buffs and museumgoers of all ages and backgrounds, as well as all who passed by it — but now that monument is gone.

The main piece of the Teddy Roosevelt monument was taken away by crane in the wee hours of early Thursday morning, just after midnight on Wednesday.

Workers secure part of a statue of Theodore Roosevelt, the nation’s 26th president, after removing it from outside the entrance to the American Museum of Natural History, in New York City, New York, on Jan. 20, 2022.  (REUTERS/Caitlin Ochs)

The statue is taking a hike out of New York City — and is now headed for North Dakota.

The bold equestrian monument to the nation’s 26th president depicted him flanked by two figures walking beside him, a Native American man and an African man — but it sparked major controversy and protests from some corners, with certain groups and individuals claiming it glorified colonialism and racism. 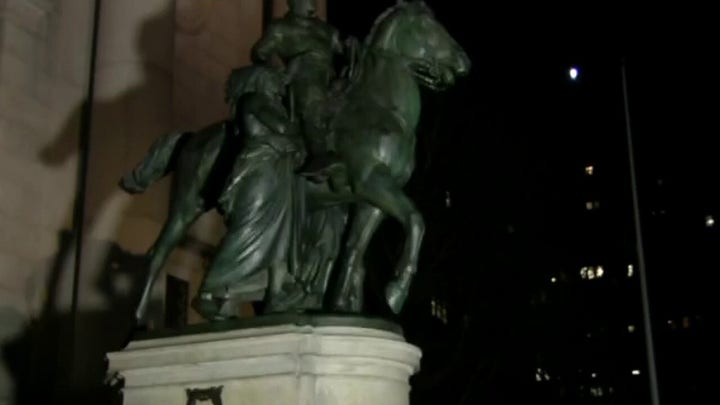 Others, however, defended the tribute and rallied to keep the monument in place, with some wanting deeper context and understanding around it.

The New York Young Republican Club, among others, defended the monument and spoke to “Fox and Friends” about the issue nearly two years ago. This was “about a cultural revolution … engulfing our nation,” the group’s leader, Gavin Wax, said at the time. “We need to stand up … We have history on our side.”

The controversy was part of a larger push to remove statues, monuments and other images across America honoring certain historical figures, Confederate soldiers, slave owners and others.

Workers remove part of a statue of Theodore Roosevelt that has stood outside the entrance to the American Museum of Natural History in New York City since 1940, which the museum proposed to remove following objections from some that it was a symbol of colonialism, Jan. 20, 2022.  (REUTERS/Caitlin Ochs)

After a crane took the statue away early on Thursday morning, just the concrete pedestal remained, as The New York Post reported.

Scaffolding now surrounds what had been the tribute to Theodore Roosevelt.

Evangelist Alveda King, speaking to Fox News’ Neil Cavuto a few years ago about this issue, said, “We’re fighting over statues now … If you’re going to take one statue down, you’re going to have to take all statues down. And that doesn’t work. Why don’t we leave them up, and find out why they were there?”

A crane carries away a portion of the statue of Theodore Roosevelt in front of the American Museum of Natural History in New York City, on Jan. 20, 2022.  (REUTERS/Caitlin Ochs)

Efforts, however, to put a larger context on controversial aspects of American history did not help quell the protests against such monuments.

The $2 million removal, carried out by the museum and the city, comes after The New York City Public Design Commission voted last June to relocate the monument, the Post reported.

The museum last month put a tarp over the monument ahead of the statue’s removal.

A wall scaffolding and white tarp surround what is left of the controversial equestrian statue of President Theodore Roosevelt, at the American Museum of Natural History this week in New York City. A crew removed a portion of the statue overnight.  (AP Photo/Mary Altaffer)

One of the ex-president’s descendants, Theodore Roosevelt V, cheered the statue’s removal plan last year, saying it was “fitting that the statue is being relocated to a place where its composition can be re-contextualized to facilitate difficult, complex and inclusive discussions,” the Post noted.

A variety of tweets have shown up about the statue’s removal, including these shown below.

He was a statesman, conservationist, naturalist and historian.

The statue’s new destination in a long-term loan agreement is Medora, North Dakota.