Cardinal Jorge Mario Bergoglio has become the first Jesuit pope in Catholic Church history. How will that influence him?

THE WEEK STAFF
Share on FacebookShare on TwitterShare via Email

Who are the Jesuits? Formally called the Society of Jesus, they are the largest single religious order in the Catholic Church. The society was founded in Paris in 1534 by St. Ignatius Loyola, a Basque soldier who discovered his faith while recuperating from a cannonball wound. He and six fellow students at the University of Paris, including St. Francis Xavier, dedicated themselves to serving the pope as missionary soldiers of Christ. The order was originally organized along military lines, under the leadership of a “Father General.” Early followers named themselves “The Company of Jesus,” and were nicknamed “God’s Marines,” for their willingness to go anywhere in the world at the pope’s command. Pope Paul III recognized them as an order in 1540; today there are over 20,000 Jesuits, including missionaries, teachers, and scholars.

What are they known for? Primarily, for their missionary zeal and love for education. Inspired by the Renaissance, Loyola believed the best way of spreading God’s word was through establishing Catholic schools. The huge success of a college in Messina, Sicily, prompted him to send members of the order out into Europe and beyond to inaugurate schools, universities, and seminaries. By the time he died, in 1556, the Jesuits had founded 74 colleges in Ireland, Germany, Poland, Egypt, India, and Japan. Today, they run 189 colleges across the globe, with 28 in the United States, including Georgetown University and Boston College. Jesuit colleges emphasize free-thinking and theological debate, which is why more-conservative Catholics consider the order to be dangerously independent. Vincent O’Keefe, an American Jesuit and a former acting Father General, used to joke that Catholics believe “the Jesuits know everything—but nothing else.”

Are they respected? They haven’t always been. The Jesuits certainly were well regarded during the 16th and 17th centuries, when they were viewed as the most pious and most intellectual of priests. Kings of France chose Jesuit confessors for 200 years. But as Catholic Europe disintegrated amid much palace intrigue, the Jesuits’ obedience to the papacy made them many enemies. Jesuits were widely viewed as conniving manipulators, and Father Generals were dismissively known as “Black Popes” for their supposed control of the Vatican. Anti-Catholics suspected the order of plotting to overturn governments at the pope’s command. The order was eventually dissolved by Pope Clement XIV in 1773, at the urging of anti-clerical kings of Europe. The Jesuits survived in Russia and Prussia, until the pope’s edict was rescinded in 1814. But suspicion lingered. “If ever there was a body of men who merited eternal damnation on Earth and in hell, it is this society of Loyola’s,” wrote John Adams to Thomas Jefferson in 1816. Adams feared the Jesuits would try to undermine the new republic’s separation of church and state.

What’s their current reputation? The Jesuits are still viewed within the church as the most liberal of the clerical orders, with a rebellious bent. Because of their missionary work, particularly in Latin America, the Jesuits developed strong sympathy for desperately poor people subjugated by colonial or military governments. In 1974, the society decreed that its mission was the “service of faith, of which the promotion of justice is an absolute requirement.” For some priests, this led naturally to a leftist movement called “liberation theology,” which champions a revolutionary class struggle pitting the people against the powerful and wealthy. Some Jesuits actually fought alongside communist guerrillas in Guatemala, Honduras, and El Salvador. In 1981, Pope John Paul II, aghast at the political direction the order was taking, overrode the Jesuits’ nominee for Father General and appointed a pontifical delegate of his own. That created a split between Jesuits and the Vatican that has not been fully repaired.

Will Francis be a Jesuit pope? On matters of sexual morality and the role of women, Bergoglio is first and foremost a traditionalist, and not a reformer. In Argentina, he also distanced himself from the liberation theology movement, warning priests it was far too political. Still, Francis shares the Jesuits’ intense identification with the poor and powerless; he has called “the unjust distribution of goods” a “social sin that cries out to Heaven.” There’s little doubt that Bergoglio’s Jesuit concern for social inequality will guide the Vatican’s direction in coming years. Like other Jesuits, he also has little regard for hierarchy in itself and the trappings of power; he traveled to work in Buenos Aires by public transport. Those who know him say that the new pope will use his position to do what Jesuits have always done—evangelize, especially in the church’s new center of gravity in the Southern Hemisphere. The election of a Jesuit as pope sends a powerful message, said Father Kevin O’Brien, a Jesuit who is vice president for mission and ministry at Georgetown University. “The church has been sidetracked by sexual and financial scandals. Now, it’s about getting back to the basics. It’s about preaching the gospel and helping the poor.”

The Jesuits’ worldly achievements Jesuits have been among the most fervent missionaries in history, evangelizing across the globe—and in the process, making a huge impact on the secular world. Jesuit explorers founded the city of São Paulo, located the source of the Blue Nile, and charted the Amazon and Mississippi rivers. Jesuit missionaries brought rhubarb, quinine, vanilla, and ginseng back from Asia and South America, and are believed to have introduced the umbrella to the West. 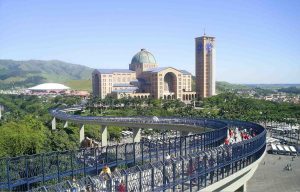 The order’s emphasis on learning has also helped it make significant strides in human knowledge. A Jesuit mathematician, Christopher Clavius, created the modern Gregorian calendar, while Jesuit scientist Athanasius Kircher was the first to discover that the bubonic plague was spread by microorganisms. There are 35 craters on the moon named after Jesuit scientists and astronomers. Less well known, perhaps, is their contribution to the theater: A 17th-century Jesuit teacher is thought to have invented the trap door