God’s Word has given warning of the impending danger; let this be unheeded, and the Protestant world will learn what the purposes of Rome really are, only when it is too late to escape the snare.  {FLB 329.5}

“Cranmer was archbishop of Canterbury (1533 – 1556) and a leader of the English Reformation who was responsible for establishing the basic structures of the Church of England.

Although Henry VIII had severed the link between the Church of England and Rome, he never permitted the renunciation of Catholic doctrine or ceremony. It was during Edward’s reign that Protestantism was established for the first time in England with reforms that included the abolition of clerical celibacy and the Mass and the imposition of compulsory services in English. The architect of these reforms was Thomas Cranmer,Archbishop of Canterbury, whose Book of Common Prayer is still used.

Cranmer planned to draw together all the reformed churches of Europe under England’s leadership to counter the Council of Trent, the Roman Catholic Church’s response to the Protestant Reformation. In March 1552, Cranmer invited the foremost Continental reformers, Bullinger, John Calvin, and Melanchthon to come to England and to participate in an ecumenical council.[84] The response was disappointing: Melanchthon did not respond, Bullinger stated that neither of them could leave Germany as it was riven by war between the Emperor and the Lutheran princes, and while Calvin showed some enthusiasm, he said he was unable to come. Cranmer acknowledged Calvin and replied stating, “Meanwhile we will reform the English Church to the utmost of our ability and give our labour that both its doctrines and laws will be improved after the model of holy scripture.”[82]  Wikapedia

Thomas Cranmer (Anglican)
“Whereof it followeth Rome to be the seat of antichrist, and the pope to be very antichrist himself. I could prove the same by many other scriptures, old writers, and strong reasons.” (Referring to prophecies in Revelation and Daniel.) Taken from Works by Cranmer, Vol. 1, pp. 6-7.

Cranmer was told that he would be able to make a final recantation but this time in public during a service at the University Church. He wrote and submitted the speech in advance and it was published after his death. At the pulpit on the day of his execution, he opened with a prayer and an exhortation to obey the king and queen, but he ended his sermon totally unexpectedly, deviating from the prepared script. He renounced the recantations that he had written or signed with his own hand since his degradation and as such he stated his hand would be punished by being burnt first. He then said, “And as for the pope, I refuse him, as Christ’s enemy, and Antichrist with all his false doctrine.”[98] He was pulled from the pulpit and taken to where Latimer and Ridley had been burnt six months before. As the flames drew around him, he fulfilled his promise by placing his right hand into the heart of the fire while saying “that unworthy hand” and his dying words were, “Lord Jesus, receive my spirit… I see the heavens open and Jesus standing at the right hand of God.”[99]

What our forfathers forged others ignored ……….. 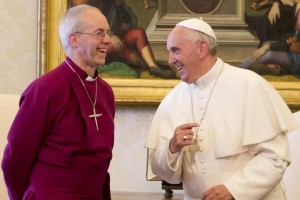 The archbishop of Canterbury and Pope Francis’s meeting has been described as a chance for the two church leaders to get to know each other. Photograph: Getty

Pope Francis and the archbishop of Canterbury will meet for the first time on Friday when Justin Welby travels to Rome for “a personal and fraternal visit” with the leader of the world’s 1.2 billion Roman Catholics.

Relations between the churches have been strained in recent years and there are hopes the change of leaders, and the visit, will bring them closer together.

Welby, who will be accompanied by his wife, Caroline, will visit the tomb of St Peter beneath the Basilica before stopping to pray at the tomb of Pope John Paul II.

After meeting Cardinal Kurt Koch, president of the Pontifical Council for Promoting Christian Unity, he will see the pope for a private conversation followed by addresses and a service of midday prayer.

Although neither the Vatican nor Lambeth Palace has provided many details of the visit, Rome has stressed its importance as an ecumenical event and highlighted the two men’s shared commitment to tackling poverty. “It’s a visit to get to know each other because both the Holy Father and the archbishop of Canterbury are new in their posts,” Monsignor Mark Langham, who is in charge of Anglican relations at the Pontifical Council for Promoting Christian Unity, told Vatican Radio.

“Both have a particular interest in the economy and its effect on men and women around the world, on our responsibility to reach out to the marginalised and the poor and an interest that churches should be involved to make society a more Christ-like place.”

Pope Francis was inaugurated on 19 March – two days before Welby was enthroned as leader of the world’s 77 million Anglicans. The pope has said he is looking forward to “continuing the warm fraternal relations that our predecessors enjoyed”, while the archbishop has reciprocated by recognising that the two churches “hold a special place for one another”.

However, there have been tensions in recent years, with the Roman Catholic hierarchy unimpressed by the Anglican communion’s ordination of women, and many in the Anglican establishment angered by the last pope’s decision to create a personal ordinariate to welcome Anglicans at odds with their church’s position on female clergy into the embrace of the Roman Catholic church.

The Rev Canon Dr Judith Maltby, chaplain of Corpus Christi College, Oxford, and a reader in church history at the university, said that while many lay and clerical members of both churches got on well, the Roman Catholic and Anglican hierarchies were living through an “ecumenical winter”.

At the heart of the frosty relations, said Maltby, was the issue of women in the church.

“For the Roman Catholics it’s the ordination of women and for many Anglicans, it’s the fact that [the Catholics] don’t ordain women,” she said. “Anglicans are also in a very different place on discussions about human sexuality than Roman Catholics can be at the official level.”

Still, said, Maltby, the backgrounds of the two new leaders gave cause for optimism when it came to building bridges. Pope Francis led the Jesuits through Argentina’s dirty war and has consistently abjured the trappings of office while Welby, who began his professional life in the oil business, has worked as a peace negotiator in some of the most dangerous places in the world.

The contrast with their predecessors, Pope Benedict XVI and Rowan Williams, is marked. “You can see that people like Benedict and Rowan actually had a lot in common as professional academics, but in Francis and Justin, there is something that feels a bit more worldly about them,” said Maltby.

“How can you have been a priest – and indeed an archbishop – in Argentina and not know about the real world? They might both be two rather more pragmatic personalities and that might work for them in terms of their relationship.”

Michael Walsh, a papal historian and former Jesuit, agrees that Pope Francis and Welby appear to be more practical leaders than their scholarly predecessors. But he argues that the pope will be too tied up with reforming the Roman curia – the church’s scandal-mired and bitterly divided central bureaucracy – to find time to repair inter-church rifts. In any case, says Walsh, the two churches remain firmly divided over female clergy.

“Clearly, there were things that Benedict did that upset the Anglican communion, in particular the establishment of the ordinariate,” he said. “I can’t see the present pope being a great liberal or changing the church’s position on the big issue of the ordination of women, which clearly has been the cause of a breakdown between the church of Rome and the Anglican communion.

“Francis has a lot of problems already in dealing with the Roman curia, even if he was that way inclined, which I’m not sure that he would be.”

Maltby is more optimistic. Yes, it has been a long ecumenical winter, she says, but sometimes the personalities of those at the top are sufficient to bring about a thaw: “A Christian must always hope – that’s part of the job description, really – and spring always follows winter.”