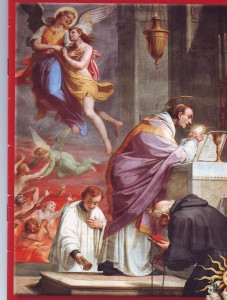 Comment: (Still another fabrication was needed to enable Rome to profit by the fears and the vices of her adherents. This was supplied by the doctrine of indulgences. Full remission of sins, past, present, and future, and release from all the pains and penalties incurred, were promised to all who would enlist in the pontiff’s wars to extend his temporal dominion, to punish his enemies, or to exterminate those who dared deny his spiritual supremacy. The people were also taught that by the payment of money to the church they might free themselves from sin, and also release the souls of their deceased friends who were confined in the tormenting flames. By such means did Rome fill her coffers and sustain the magnificence, luxury, and vice of the pretended representatives of Him who had not where to lay His head. (The Great Controversy) 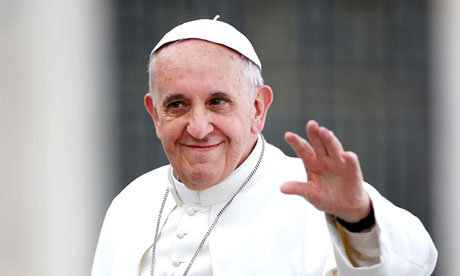 In its latest attempt to keep up with the times the Vatican has married one of its oldest traditions to the world of social media by offering “indulgences” to followers of Pope Francis‘ tweets.

The church’s granted indulgences reduce the time Catholics believe they will have to spend in purgatory after they have confessed and been absolved of their sins.

The remissions got a bad name in the Middle Ages because unscrupulous churchmen sold them for large sums of money. But now indulgences are being applied to the 21st century.

But a senior Vatican official warned web-surfing Catholics that indulgences still required a dose of old-fashioned faith, and that paradise was not just a few mouse clicks away.

“You can’t obtain indulgences like getting a coffee from a vending machine,” Archbishop Claudio Maria Celli, head of the pontifical council for social communication, told the Italian daily Corriere della Sera.

Indulgences these days are granted to those who carry out certain tasks – such as climbing the Sacred Steps, in Rome (reportedly brought from Pontius Pilate’s house after Jesus scaled them before his crucifixion), a feat that earns believers seven years off purgatory.

But attendance at events such as the Catholic World Youth Day, in Rio de Janeiro, a week-long event starting on 22 July, can also win an indulgence.

Mindful of the faithful who cannot afford to fly to Brazil, the Vatican’s sacred apostolic penitentiary, a court which handles the forgiveness of sins, has also extended the privilege to those following the “rites and pious exercises” of the event on television, radio and through social media.

“That includes following Twitter,” said a source at the penitentiary, referring to Pope Francis’ Twitter account, which has gathered seven million followers. “But you must be following the events live. It is not as if you can get an indulgence by chatting on the internet.”

In its decree, the penitentiary said that getting an indulgence would hinge on the beneficiary having previously confessed and being “truly penitent and contrite”.

Praying while following events in Rio online would need to be carried out with “requisite devotion”, it suggested.

“What really counts is that the tweets the Pope sends from Brazil or the photos of the Catholic World Youth Day that go up on Pinterest produce authentic spiritual fruit in the hearts of everyone,” said Celli. Article Tom Kington in Rome
The Guardian, Wednesday 17 July 2013

It was penance at the stairs of Rome Luther’s life was to be transformed.

In the city where he expected to find the church of God in all its holiness, he found sin rampant beyond all precedent. “It is almost incredible,” says he, “what infamous actions are committed at Rome; one would require to see it and hear it in order to believe it. It is an ordinary saying that if there is a hell, Rome is built upon it. It is an abyss from whence all sins proceed.” 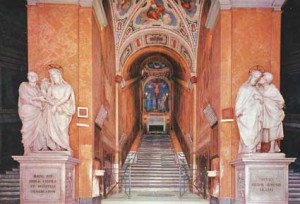 One climbs the steps on one’s knees and on each step the following verses are supposed to be repeated: Holy Mother, pierce me through,In My heart each Wound renew of my savior crucified.
Of course the prayer is not to God, but to a false god Mary. (Why not pray to Mary’s great great great grandmother as well?)