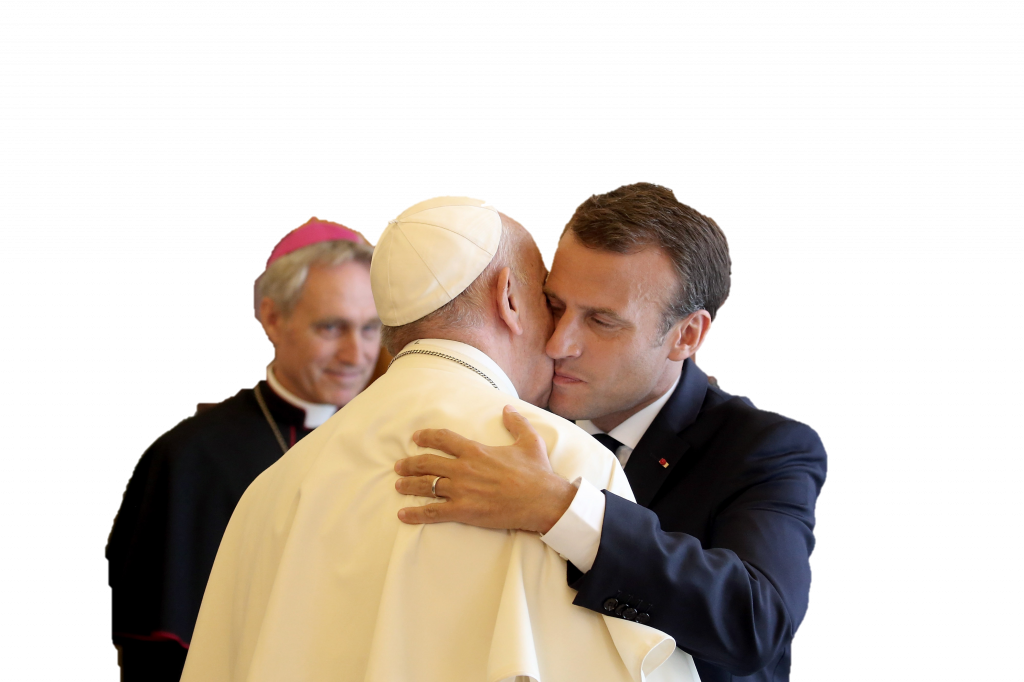 The Document on Human Fraternity for World Peace and Living Together, also known as the Abu Dhabi declaration or Abu Dhabi agreement, is a joint statement signed by Pope Francis of the Catholic Church and Sheikh Ahmed el-Tayeb, Grand Imam of Al-Azhar, on 4 February 2019 in Abu Dhabi, United Arab Emirates.

And through his policy also he shall cause craft to prosper in his hand; and he shall magnify [himself] in his heart, and by peace shall destroy many: he shall also stand up against the Prince of princes; but he shall be broken without hand. {Daniel 8:25}

PARIS (Reuters) – Emmanuel Macron has blurred a line that has kept French government free of religious intervention for generations, critics said on Tuesday, after he called for stronger ties between the state and the Catholic Church.

The issue is particularly sensitive in historically Catholic France, where matters of faith and state were separated by law in 1905 and which is now home to Europe’s largest Muslim and Jewish communities.

The president’s remark might have raised fewer eyebrows had he left it until later in a one-hour speech on Monday night to Church dignitaries in Paris, where he began by saying that just arranging such a gathering was an achievement in itself.

“If we’ve done so, it must be because somewhere we share the feeling that the link between Church and State has been damaged, that the time has come for us, both you and me, to mend it,” he said.

Critics, many his natural political opponents, took the president to task.

“It took three centuries of civil war and struggle to get to where we are and there’s absolutely no reason to turn the clock back… because of an intellectual whim of the president’s,” said hardline leftist Jean-Luc Melenchon, a candidate in the election that brought Macron to power last May.

Former prime minister Manuel Valls and Socialist Party head Olivier Faure said the separation of church and state must remain a mainstay of political life, in a country where public service employees are banned from wearing Muslim veils and other dress with religious connotation.

Gay rights groups, who fought a bitter campaign against the Church over the introduction of same-sex marriage in 2013, were also critical.

THE ROLE OF ISLAM

Raised in a non-religious family, Macron was baptised a Roman Catholic at his own request when he was 12.

His government is now struggling to redefine the role of France’s second most popular religion, following a spate of attacks by Islamist militants that have killed around 240 people since early 2015.

Hardline Islam sits uneasily with France’s secular foundations, and Macron is under mounting pressure to address voter fears that its influence may spread via mosques and prisons that offer fertile ground for radical proselytisers.

France’s guiding principles also hold that religious observance is a private matter, for all faiths.

Catholic leaders present for Macron’s speech seemed less persuaded than his political detractors that might soon again be exerting influence on government.

Cardinal Georges Pontier, who met the president on Monday night, told CNews TV he read the remarks as nothing more than an invitation to more open dialogue.

“Some people imagine the Church wants to take power over people’s minds and more, but that’s not true,” he said.