What does the Bible say about the beast with lamb-like demeanor: It causes fire to come down in the sight of men. Revelation 13 Because we are simple, easily misled by media and often stupid the Lord has simply given this description of a lamb-like beast. A power which all the beasts of the Bible represent rising from the earth that (it is a new power coming from the vacancy or a new land) represents the attributes of Christ- only Protestant  America fits the picture. US shall act as a persecuting power against the law of God. So from the headline who will come out the race victor? We already know.  He causes them that dwell on the earth to worship the first beast whose deadly wound was healed and those who will not receive the mark of the beast shall not buy or sell and shall be killed. Space is the last frontier and this power causes fire to come down in the sight of men. 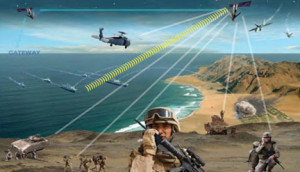 The United States own at least 500 satellites alone, as many as the rest of the world’s satellites combined. It is believed 100 of those US satellites are used for military purposes.

It denies it is placing actual weapons in space, yet Air Force Space Command Commander General John Hyten said during a press conference last year: “We have a responsibility to defend against all threats. That’s what our job is. … There is no doubt we have seen threats appear in the last decade, and we have to be prepared to respond to those threats.

The agency projects that 30,000 drones could be in the nation’s skies by 2020 and by this time there will 24 hour drone surveillance.

How did the USA land in such a place as this, to usher in the last battle of day of God Almighty? Not alone will it be a physical power to cause submission, it will make way for the Antichrist. This has been long predicted : “It is the lying wonders of the devil that will take the world captive, and he will cause fire to come down from heaven in the sight of men. He is to work miracles, and this wonderful, miracle-working power is to sweep in the whole world.”–2SM 51 (1890).  {LDE 167.3}

A power from beneath is working to bring about the last great scenes in the drama,–Satan coming as Christ, and working with all deceivableness of unrighteousness in those who are binding themselves together in secret societies. Those who are yielding to the passion for confederation are working out the plans of the enemy. The cause will be followed by the effect.–Testimonies, vol. 8, pp. 27, 28.  {ChS 50.1}

The masonic secret societies are an occult organisation and the occult is carried forward in secret and this has been the way in which Protestants have entered in Jesuit ideology which at its highest level is the Illuminati- Luciferian.  The symbols that decorate the church of Rome have been entered into at their highest level and the Jesuits are the most powerful group to realize their meaning in the occult and use this to introduce Protestants into the masons and into their fold.

Adam Weishaupt was a Jesuit trained philosopher and lay professor of cannon law at the university of Ingolstadt in southern Germany, a school of the Roman Catholic Jesuit order.  He is known as the founding member of the Illuminati. The Jesuits/illuminati are known to conspire against all kings, governments and religions. People get confused concerning who the Illuminati are because the Jesuits were abolished by order of the Pope and being a powerful organisation with influence and wealth they had to reform, reorganize during the time before its restoration to power.

From the Jesuit Church of Rome their founder suppressing Protestantism as seen on the Church front. The angel ripping the pages from scripture and the Queen of heaven condemning Huss and Luther to hell. Note in here the Illuminati symbol of the all seeing eye of Horus.

The rights of man to secularism and  religious syncretism maybe traced back to the Freemasons and secret societies; that is modernism and equality such as gay rights and gay marriage which Obama took to his friends in Africa who are naturally opposed to such ideology. In terms of what it mean is that now the press has been suppressed , next public comment, as the masses are swayed or forced to submit.

Both the Freemasons and Order of Illuminati were outlawed by Catholic Bavaria by royal decree and with the Vatican’s approval. We must remember that within the Catholic church are many orders and they jostle for wealth and power at the top. “It is my opinion that if the liberties of this country  the United States of America  are destroyed, it will be by the subtlety of the Roman Catholic Jesuit priests, for they are the most crafty, dangerous enemies to civil and religious liberty. They have instigated MOST of the wars of Europe.” Marquis de LaFayette (1757-1834; French statesman and general. He served in the American Continental Army under the command of General George Washington during the American Revolutionary War.)  Weishaupt said the word Illuminati is derived from Lucifer and means ‘holders of the light.’

Weishaupt would lure Protestant Christians to atheism and then Satanism through little steps until they finally arrived.  Without secrecy and these stepping stones nobody would ever join. And while unaware of the implications of these secret societies they join, these initiates are the foot soldiers for New World Order and in the West they have swarmed the positions of power- either being Jesuit or masonic or affiliated.

Says the prophet: “I saw three unclean spirits like frogs; . . . they are the spirits of devils, working miracles, which go forth unto the kings of the earth and of the whole world, to gather them to the battle of that great day of God Almighty.” Revelation 16:13, 14. Except those who are kept by the power of God, through faith in His word, the whole world will be swept into the ranks of this delusion. The people are fast being lulled to a fatal security, to be awakened only by the outpouring of the wrath of God. {DD 23.3}
Saith the Lord God: “Judgment also will I lay to the line, and righteousness to the plummet: and the hail shall sweep away the refuge of lies, and the waters shall overflow the hiding place. And your covenant with death shall be disannulled, and your agreement with hell shall not stand; when the overflowing scourge shall pass through, then ye shall be trodden down by it.” Isaiah 28:17, 18. {DD 23.4}