Australian immigration authorities have detained Novak Djokovic, arguing that although the Serbian’s medical exemption from Covid-19 vaccination was valid, his views are too dangerous to let him stay.

Hawke cited Djokovic’s “high-profile status and position as a role model” while arguing that his “ongoing presence in Australia may foster… disregard for the precautionary requirements following receipt of a positive Covid-19 test” as he defended his decision to cancel the visa.

“I consider that Mr. Djokovic’s ongoing presence in Australia may lead to an increase in anti-vaccination sentiment generated in the Australian community, potentially leading to an increase in civil unrest of the kind previously experienced in Australia with rallies and protests which may themselves be a source of community transmission,” Hawke added.

Djokovic’s Docotor Dr. Cetojevic stated: It’s absurd that somebody who has optimal health is a threat to the health of the public,” he said, via AFP. “How can a super healthy guy be a threat for the Australian Open?”

The decision by Immigration Minister Alex Hawke to unilaterally block Djokovic’s stay in Australia was deemed by authorities to be in the public interest – but it was also made in the shadow of an exponential rise in Covid-19 cases linked to the highly-transmissible Omicron variant, and Cetojevic alleges that Djokovic is being targeted for his personal beliefs.

“It’s all politics – it starts with politics, not anything else,” he said.

Some of Cetojevic’s methods, such as his Chinese and holistic approaches to healthcare, have been dismissed by his peers, and he also finds himself in something of a medical minority when it comes to vaccines – an issue which is at the root of Djokovic’s Australian drama.

“Definitely,” he said when asked if he suspected that Djokovic’s performance on the court would be hindered by the vaccine.

“Let’s call things by their right name. These so-called vaccines are, in fact, experimental products that have not been clinically proven. I’m seeing patients these days, ordinary people who followed the recommendation to be injected, who are now facing major health issues.

“The whole idea is to provoke the body’s immune system but we are all different. Some people have different reactions.

“If you have the best car for Formula One and you put the wrong petrol inside, what will happen?” 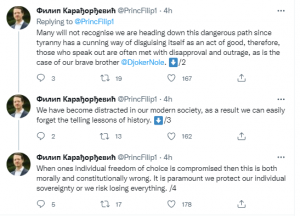 Taking this high-profile player as an example and how he is dealt with does not speak well for Australia’s future.

Djokovic’s Serbian’s medical exemption from Covid-19 vaccination was valid, but his views are too dangerous to let him stay.