h Xavier Johnson of Mesquite, Texas, a military veteran Afro- American who had served in Afghanistan.

Picture from the LA racial riots 1992.

Those who study the history of the Israelites should also consider the history of these people who were once  slaves in America, who have suffered, who have been educated in crime, degraded, and oppressed, and left in ignorance to perish. Their physical freedom was obtained at a great loss of life, and Christians generally should have looked with compassion upon the colored race, for which God had a care. They should have done a work for them that would have uplifted them. They should have worked through the wisdom of God to educate and train them. We have been very neglectful of our colored brethren, and are not yet prepared for the coming of our Lord. The cries of these neglected people have come up before God. Who has entered into the work since their deliverance from bondage, to teach them the knowledge of God? The condition of the colored people is no more helpless than was the condition of the Hebrew slaves. The children of Israel were addicted to licentiousness, idolatry, gluttony, and gross vices. This is ever the result of slavery. Review & Herold December 17 1895 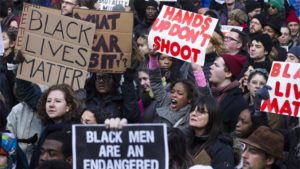 Speaking of the future, (when Sunday law is enacted)…Slavery will again be revived in the Southern States; for the spirit of slavery still lives. Therefore it will not do for those who labor among the colored people to preach the truth as boldly and openly as they would be free to do in other places. Even Christ clothed His lessons in figures and parables to avoid the opposition of the Pharisees. When the colored people feel that they have the word of God in regard to the Sabbath question, and the sanction of those who have brought them the truth, some who are impulsive will take the opportunity to defy the Sunday laws, and by a presumptuous defiance of their oppressors they will bring to themselves much sorrow. Very faithfully the colored people must be instructed to be like Christ, to patiently suffer wrongs, that they may help their fellow men to see the light of truth. {2MR 299.4}