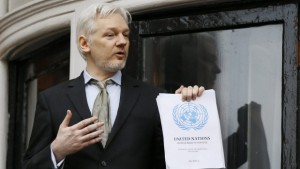 a breakthrough for Assange. Freedom so close but is it reality? The UK is part and parcel with US government in their interest to now subvert liberty and justice in what they consider national interests and for the US that is for world domination. Under Obama nation debt has skyrocketed to 19 trillion dollars officially, 7 trillion just under Obama and 65 trillion unofficially. Makes you wonder why they and not others can manage such a debt and still pledge this week 120 million to Israel in a tunnel detection system, money that they just don’t have. The point being that truth and with that the people’s perception ultimately counts and so they must deal with little flies on the wall that might get in the way.

Now if Assange gets his freedom they will look to deal with him in another way. Although Assange is not a Messiah, is it not expedient that one should die rather than jeopardize the national interest?  Assange stated that it was an important ruling for the independence of the UN system. The UN is the last power that unites for an hour with the beast in the last moment of time on the world stage.

At the same time it was revealed that a US plane was waiting in Denmark to pick up Snowden and take him back for trial  in 2013. US has such an influence that the countries of the west cooperate without question rather than applying individual’s rights. The US was founded on the right of the individuals in matters of truth and conscience, therefore we see an evil present, particularly by these men’s revelations.

“The purpose of the plane’s presence at Copenhagen Airport was apparently to have the ability to transport Edward Snowden to the USA in case he was delivered from Russia or another country,” the minister said in a written statement.”