Who wants to look & feel young forever?  Well there is only one way to do it!

Christ extends His hand and love to all who will accept the offer to become heirs of His kingdom and receive eternal life. It means coming as you are warts and all with the many burdens of life, your regrets, and problems and laying them at His feet. There is nothing you can offer Him (but you can give Him your heart) and yet without keeping the commandments of God and having the beauty of character you cannot enter the Kingdom of God and inherit eternal life. Christ said if you love me keep my commandments and I shall make my abode with you John 14:21-23. He said be ye therefore perfect even as your Father in heaven is perfect which appears impossible to human reason. 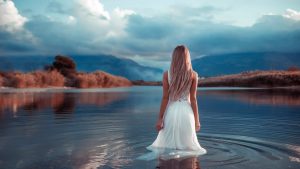 To human nature, being perfect like God is perfect appears as a paradox becoming a point of contention. There is nothing perfect in us. Jeremiah 13:23 Can the Ethiopian change his skin, or the leopard his spots? [then] may ye also do good, that are accustomed to do evil.  One way of dealing with this problem of human nature which is imperfect is to lay it all at the cross and say it’s finished there but it’s not.

God wants to see practical realities – a real change of thoughts and feeling to become a new creation. Not as many who exhibit both good and evil at their descresion and say they are good. To have the thoughts and feelings of God one must abide in His word and ask for His Spirit as an ongoing ‘daily’ experience.

Men are not saved by being delivered utterly from the flesh; but by receiving power to conquer and rule over all the evil tendencies and the desires of the flesh. Men do not develop character (in fact, they never could) by being delivered into a realm of no temptation; but, by receiving power, in the field of temptation exactly where they are, to conquer all the temptation.
If men were to be saved by being delivered utterly from the flesh just as it is, then Jesus need never have come to the world. If men were to be saved by being delivered from all temptation, and set in a realm of no temptation, then Jesus need not have come into the world. But never, by any such deliverance as that, could man have developed character. Therefore, instead of trying to save men by delivering them utterly from the flesh, just where they were, Jesus came to the world, and put himself IN THE FLESH, just where men are; and met that flesh, JUST AS IT IS, with all its tendencies and desires; and by the divine power which he brought by faith, he “conquered sin in the flesh,” and thus brought to all mankind that divine faith which brings the divine power to man to deliver him from the power of the flesh and the law of sin, just where he is, and to give him assured dominion over the flesh, just as it is.
Instead of Jesus’ trying to save men in a way in which they would be limp and characterless, by setting them in a realm of no temptation, he came to man, just where man is, in the midst of all his temptations. Jesus came in the very flesh such as man has; and in that flesh, he met all the temptations known to that flesh, and conquered every one of them; and by that conquest brought victory to every soul in the world. Bless his name.
And every soul can have in its fullness that victory, who will receive and keep “the faith of Jesus.” For “this is the victory that overcometh the world, even our faith.” {September 18, 1900 ATJ, ARSH 600.18}

How is this power received? By a ‘daily’ (Daniel 8:11,12) growing relationship with Him. Beholding you become changed. It is relational.

The simple truth of the gospel has become confused by the thinking of men with mixed messages and more often wrong teachings that spring from the pulpit.

The nature of men and women are such as naturally appeals to two gospels, both leading us back to Rome. The doctrines of Rome which corrupted the gospel message are insidiously spoken from the many pulpits of Christendom throughout the world both Protestant and Catholic alike. .

Many Protestant pulpits say it finishes at the cross, that the 4th commandment which Jesus kept is no longer binding and that we are saved by grace and not of works. Such false gospels do not follow the life, teachings, and example of Christ and show evidence of a love for Him.

A nature that God intends for each one of us…is to be perfect in thoughts and feelings just as He is and just as Jesus was. This is a prerequisite for heaven but it’s not in looking to ourselves to do but God, imparting the gift of His presence, as we commit ourselves to a daily relationship with Him.

Peter seeing the goodness of Jesus’ nature said Lord depart from me a sinner but Jesus remained forever with him, for Peter saw in Jesus the presence of divinity which revealed his own unholiness. When we no longer trust self but ask God to be our guide, a transformation of the life can begin. Most learn this by experience, by many mistakes but God can save us from many mistakes that take us on unwanted detours.

The journey to heaven, our happiness is according to the desires of our hearts.

Now as we look in the water instead of seeing our own reflection, we see His.  But how?

His word becomes ingrained in the life as the world is shut off and He is turned on. But we must shut off the world- the influence through media and what we watch and listen to. The word is alive when we ask God to be our life. The feeling of duty is replaced by feelings of love, that is how we shall reflect God’s image that is perfect in His sight and acceptable for heaven. Keeping the commandments of God and having this testimony that He is true.

Many stumble at such a simple message. Because they do not believe that they can be perfect as God has asked. The message becomes distorted often at the pulpit. Remember the key is not what you know but who you know as the saying goes and it is relational.