The headline says: ‘Australia is Under Dystopian, Military-Enforced Lockdown Despite Less Than 5 COVID Deaths a Day.’ The people were sleeping while the Jesuits have been managing western governments worldwide. Laws were being passed and of course, are ongoing such as ‘on Wednesday 25th August 2021, Parliament passed the Surveillance Legislation Amendment (Identify and Disrupt) Bill 2020, giving the Australian Federal Police (AFP), the Australian Criminal Intelligence Commission (ACIC)—and by extension, the Australian Signals Directorate the power to spy domestically. 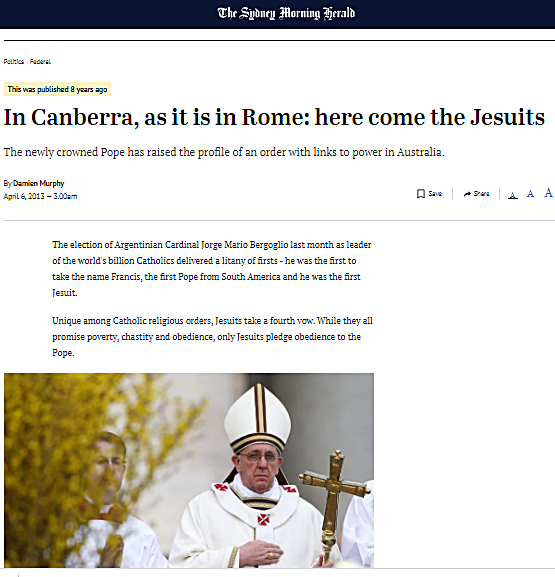 Listen to these prophetic words: “A day of great intellectual darkness has been shown to be favorable to the success of the papacy. It will yet be demonstrated that a day of great intellectual light is equally favorable for its success. In past ages, when men were without God’s word and without the knowledge of the truth, their eyes were blindfolded, and thousands were ensnared, not seeing the net spread for their feet. In this generation there are many whose eyes become dazzled by the glare of human speculations, “science falsely so called;” they discern not the net, and walk into it as readily as if blindfolded.” Great Controversy by E.G.White published 1888

False science is in genetic medicine and climate change.. False science is used to manipulate the thinking of the inhabitants of the planet to accept a Vatican global response to what was a human creation. There is no novel cornavirus for it was a known patient for 20 years and weather manipulation has been around for even a lot longer.