By all standards our diagnostics and rational for treatment should make rational sense!!!

Cancer is a frightening global problem more relevant than covid as as a pandemic and you are quickly sucked into the treatment vortex. This is because there are good diagnostics that are impressive but what counts in the end is the treatment rational- does it make sense? There can be good diagnostics and irrational treatment that can kill people in the long run as the disease returns with greater aggression or there can be poor diagnostics with good nutritional treatments that can have great long term benefits, or there can be just bad diagnostics and treatments that are hocus pocus.  Pity is its hard to find the best of both worlds!

WE know that cancer is caused by, (or we should be intelligent enough to know this by now) chemicals disrupting the DNA and this is exponential up the food chain affecting the animals and the products we eat, and by this it is transferred to us. Cancers, tumors, and pulmonary diseases are largely caused by meat eating. {CCh 235.6} Fish should be a clean flesh to eat but it is not because of pollution. In many places fish become so contaminated by the filth on which they feed as to be a cause of disease. This is especially the case where the fish come in contact with the sewage of large cities. The fish that are fed on the contents of the drains may pass into distant waters and may be caught where the water is pure and fresh. Thus when used as food they bring disease and death on those who do not suspect the danger. {MH 314.3}

When Dr. Suzuki (1970s) went to the north pole to test what was present in the ice core, there were pollutants such as heavy metal toxins found, indicating the degree of world-wide contamination.

Self-healing depends on a clean system that is nutrient rich and using chemicals- chemo and radiation to treat cancer smacks against good rational because this is what caused the problem in the first place. The initial benefit is overtaken by the return of the problem in another location with greater aggression. Drugs never cure disease; they only change its form and location. . . . When drugs are introduced into the system, for a time they seem to have a beneficial effect. A change may take place, but the disease is not cured. It will manifest itself in some other form. . . . The disease which the drug was given to cure may disappear, but only to reappear in a new form, such as skin diseases, ulcers, painful, diseased joints, and sometimes in a more dangerous and deadly form. . . . Nature keeps struggling, and the patient suffers with different ailments, until there is a sudden breaking down in her efforts, and death follows.–H. to L., Chap. 3, p. 60. {HL 243.3} Soon gene therapy will take over cancer treatments but if we do not clean the system to ensure healthy microbes well the disease returns  with more aggression often taking the life. .00001% will take the path of internal hygiene or even have a realization of such but it is this that will save lives.

Please note yin and yen, that is using both system of drug and natural means is counteractive- and I have seen this fail countless times. What we do now for today builds for tomorrow and will not take you by surprise.

A.V. Costantini, M.D. Head (Retired), H.Wieland, M.D. Head,
Lars Qvick, M.D. former heads of WHO found time after time that cancer was a fungus. They advocated the Daniel diet for treatment but despite their high credentials & extensive research they had to self publish their work. Italian doctor Tulio Simonchini, also stated that cancer is nothing but a fungus. He treated many with baking soda topically or injected into the site of the tumour. But there is no panacea you have to think system. Fungus is the not the cause. Cancer can come through 3 main avenues 1 toxic overload which can build up over time or radiation. Farmers can have severe cancer due to the sprays they work with 2. From a contaminated source such as meat or through aflatoxin sometimes found in peanuts 3. Nutritional depletion-poor food sources. For example there may be a zinc depletion.
The body tries to contain the problem as the area is encapsulated and it is often found in the fat deposits of the body. When surgery occurs metastasis can break that encapsulation and send it out into the system.

Notice red clover is consistently used through the different therapies, but this is not a panacea, for it requires both herbs and a lifestyle approach. 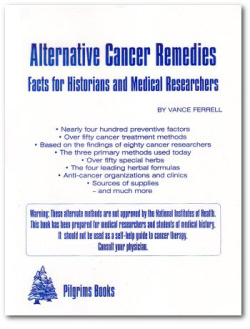 There are simple herbs that can be used for the recovery of the sick, whose effect upon the system is very different from that of drugs with their adverse effects

Look for the summary of treatments in the latter chapters.

ALWAYS have a self- healing program to work toward as described on the website or you will not reach a self-healing potential.

Many have told me that they are praying to God for healing (I understand this) but not only should we do this, we need to cooperate with God. There is a difference between faith and presumption and if you think about it you will find it in this statement. Natural means, used in accordance with God’s will, bring about supernatural results. We ask for a miracle, and the Lord directs the mind to some simple remedy. We ask to be kept from the pestilence that walketh in darkness, that is stalking with such power through the world; we are then to cooperate with God, observing the laws of health and life. Having done all that we possibly can, we are to keep asking in faith for health and strength. We are to eat that food which will preserve the health of the body. God gives us no encouragement that He will do for us what we can do for ourselves. Natural laws are to be obeyed. We are not to fail of doing our part. Here we have the essence of the gospel- asking and cooperation.

May you be healthy and happy kind regards