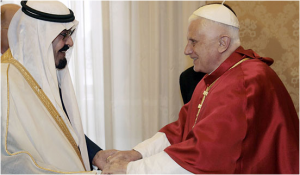 VATICAN CITY: Pope Benedict XVI lauded the contributions of Christians in Saudi Arabia — a country that embraces a strict version of Islam, restricts worship by other faiths and bans Bibles and crucifixes — in the first meeting ever between a pope and reigning Saudi king.

Benedict and the Vatican’s No. 2 official raised their concerns during separate meetings with King Abdullah, the protector of Islam’s holiest sites.

The Vatican counts 890,000 Catholics, mainly guest workers from the Philippines, among the estimated 1.5 million Christians in Saudi Arabia. Christians are barred from opening churches in the desert kingdom where Islam’s holiest sites, Mecca and Medina, are located.

“The Vatican authorities expressed their hope for the prosperity of all the inhabitants of the country, and mention was made of the positive and industrious presence of Christians,” said the Vatican communique on the meetings referring in diplomatic language to the religious plight of non-Muslims in the kingdom.

Benedict greeted the king warmly, grasping both his hands before heading into 30 minutes of private talks in his library.

At the end of the meeting, Abdullah presented Benedict with a traditional Middle Eastern gift — a golden sword studded with jewels — and a gold and silver statue of a palm tree and a man riding a camel. The pope admired the statue but merely touched the sword.

He gave Abdullah a 16th century print and a gold medal of his pontificate.

Islam is the official religion of Saudi Arabia and the kingdom requires all Saudi citizens to be Muslims. Only Muslims can visit the cities of Mecca and Medina.Under the authoritarian rule of the royal family, the kingdom enforces Sharia, or Islamic law. It follows a severe interpretation of Islam known as Wahhabism that rejects the possibility of diplomatic relations with a Christian entity. This interpretation would prohibit a Vatican embassy in Saudi Arabia on the grounds it would be equivalent to raising the cross inside Islam’s holiest places.

The Vatican maintains diplomatic relations with 176 states and institutions, including many in the Islamic world, but a Vatican official said Saudi Arabia has never asked for such a relationship.

The official, who asked that his name not be used because of the sensitivity of the issue, said Saudi Arabia is effectively a theocratic state but that the Vatican believes it must speak out for the rights of believers.

t is forbidden to practice Christianity publicly inside Saudi Arabia, and it is illegal to bring symbols from religions other than Islam into the country. Bibles and crosses are confiscated at the border.

Some Christian worship services are held secretly, but the government has been known to crack down on them, or deport Filipino workers if they hold even private services.

The Vatican has said it wants to pursue a dialogue with moderate Muslims after the pope angered the Muslim world in 2006 with a speech linking Islam to violence.

He later said he was misunderstood and regretted offending Muslims. He has since met a number of Islamic leaders and a year ago visited predominantly Muslim Turkey.

The Vatican newspaper L’Osservatore Romano said the Vatican hoped the meeting with the Saudi king would produce a “sincere” dialogue on Christian worship in the country.

The Vatican said the talks were “warm” and allowed a wide discussion on the need for inter-religious and intercultural dialogue among Christians, Muslims and Jews “for the promotion of peace, justice and spiritual and moral values, especially in support of the family,” a statement said.

Benedict has said he wants to reach out to all countries that still do not have diplomatic relations with the Vatican, which include Saudi Arabia and China.

Abdullah had visited the Vatican twice before, as crown prince and deputy prime minister.